The Northstar Asset Management article penned by Adrian Clayton (Managing Director and CIO) and Rachel Finlayson (Analyst) puts the JSE’s struggles into perspective. You can read it in conjunction with this article “How bad has the JSE been?“.

In this article we explore whether serious investors should consider South Africa and the JSE a viable long-term investment destination or a less palatable market designated for trading based on how cheap or expensive it is.

As shown in Chart 1, the JSE over a multi-decade period, is one of the world’s top performing stock exchanges. 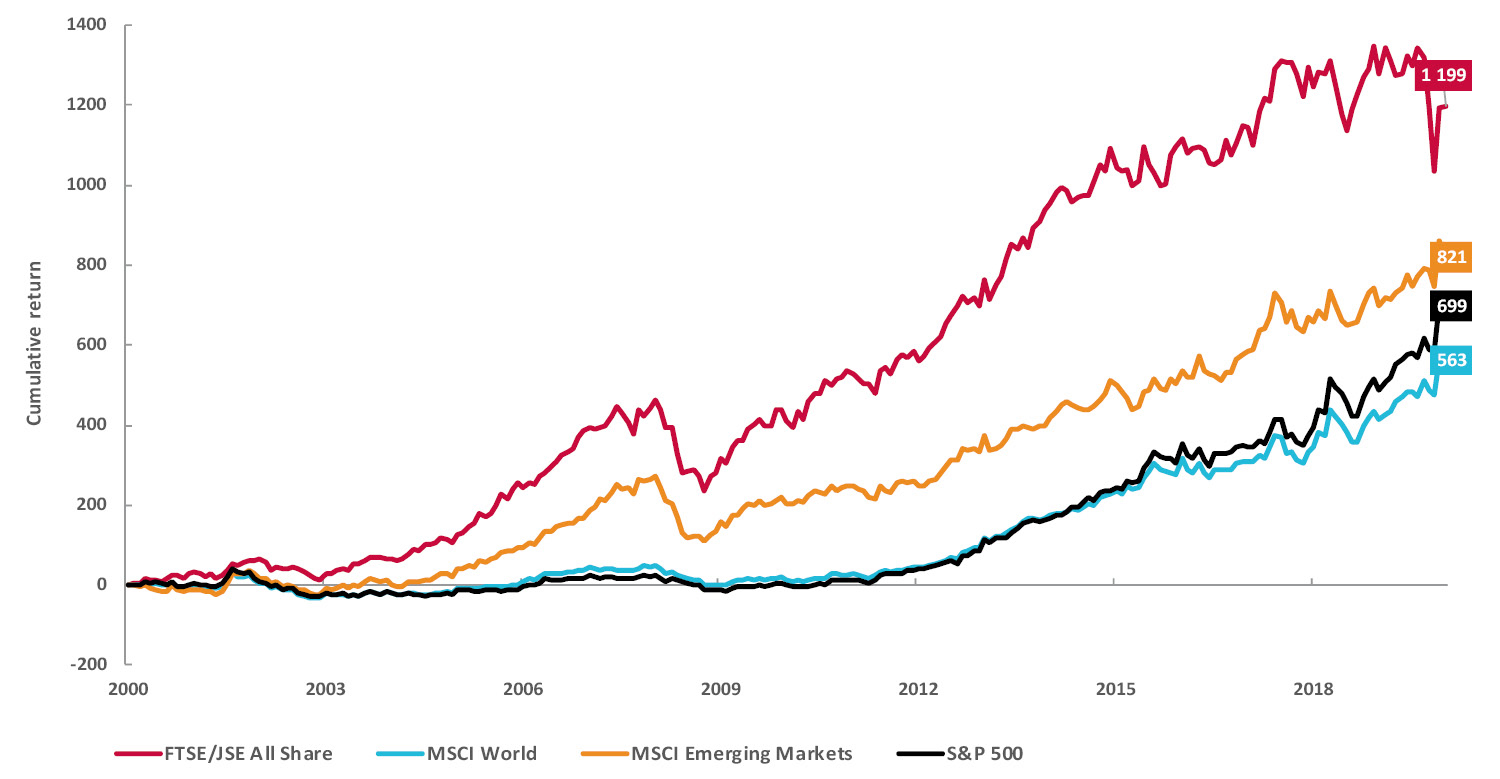 Chart 2, below, reveals the JSE All Share’s less impressive performance over the past 5 years, which would have been worse had it not been masked by large gains made in heavy weighted stocks particularly Naspers, and basic materials counters. To get a feel for this, for the five years ending May 2020, the JSE All Share Index excluding Naspers and commodities is down 24%, yet is positive 14% in total.

In Chart 3, we demonstrate the gains our market makes when the Reserve Bank cuts interest rates. Since 1960, there have been 11 significant interest rate cutting cycles and on average the market has rallied 26% (blue line) as these have unfolded. The current cutting cycle started in July 2017 at a prime lending rate of 10.5% and since then rates have been slashed 3.25% to current nominal levels of 7.25%. Only in 1962 was the prime lending rate lower than it is today. We are including this analysis as uniquely to this cycle, the JSE has delivered no gains (red line).

Chart 3: Performance of the market during repo rate easing (since 1998) 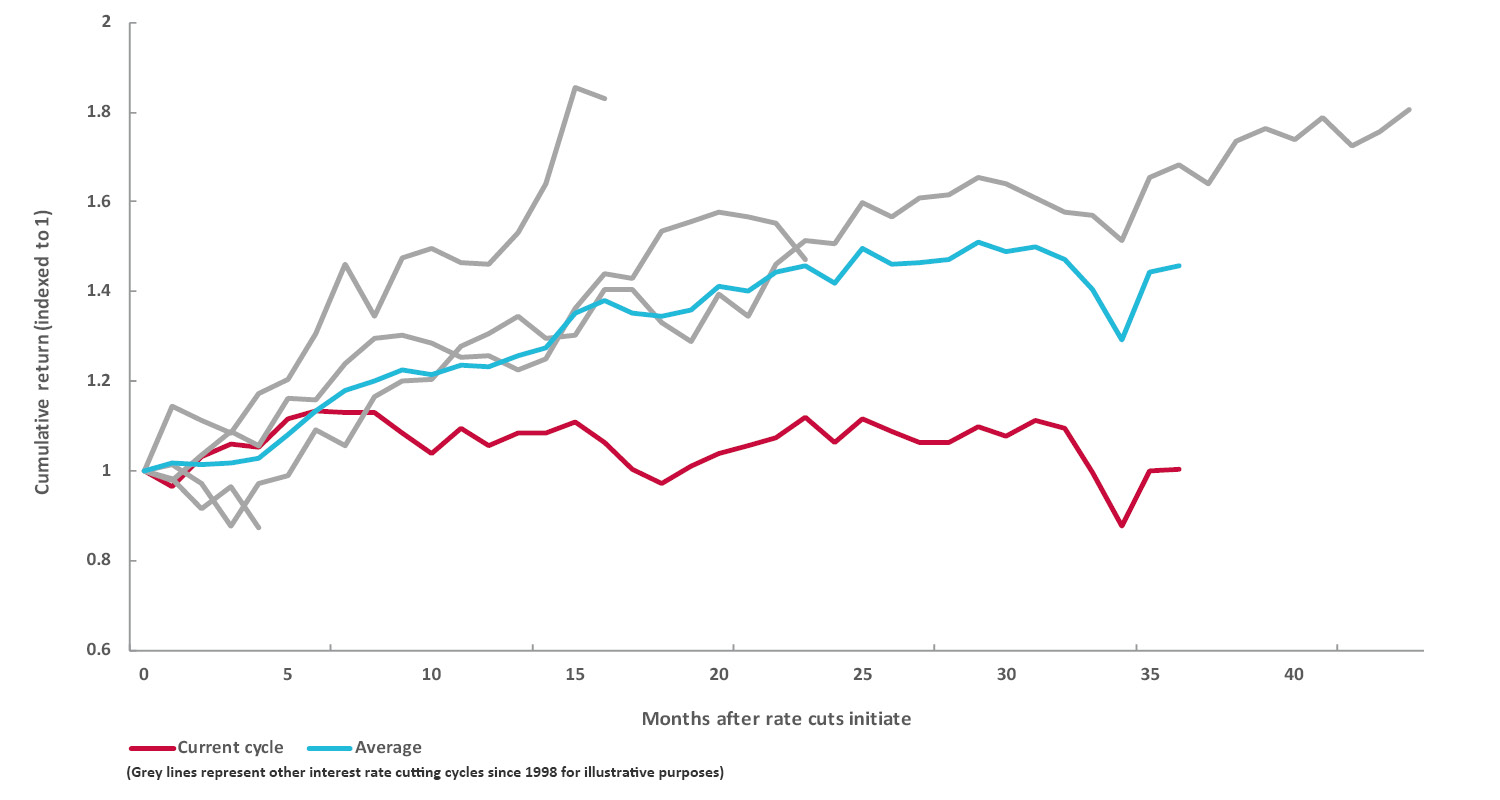 All markets go through natural cycles of out and underperformance, so, is the JSE’s 5-year moribund state just one of these cycles?

We wrote in our 2013/2014 Quarterly Reports that SA stocks had unsustainably high profit margins and were overpriced by investors. Subsequently, the JSE continued to rally into 2015 and then promptly flat-lined. Some of the poor market returns can be ascribed to an expensive stock market normalising, as the profit cycle naturally ebbed lower, yet there is more to this.

Before discussing what has been mismanaged in South Africa, it is fair to highlight an area of our macro-economic ecosystem that has been outstandingly navigated. We believe that the South African Reserve Bank (SARB) has been a pinnacle of excellence within a sea of dissonance. Whilst the bank’s insistence on high real interest rates has been frustrating, this must be contextualised against an environment of fiscal mismanagement and plunder where the SARB felt a duty to be a steady, conservative hand on the tiller. Chart 4 highlights how inflation has been contained, albeit during a period of global disinflation, within the SARB’s mandated 3% to 6% target band. 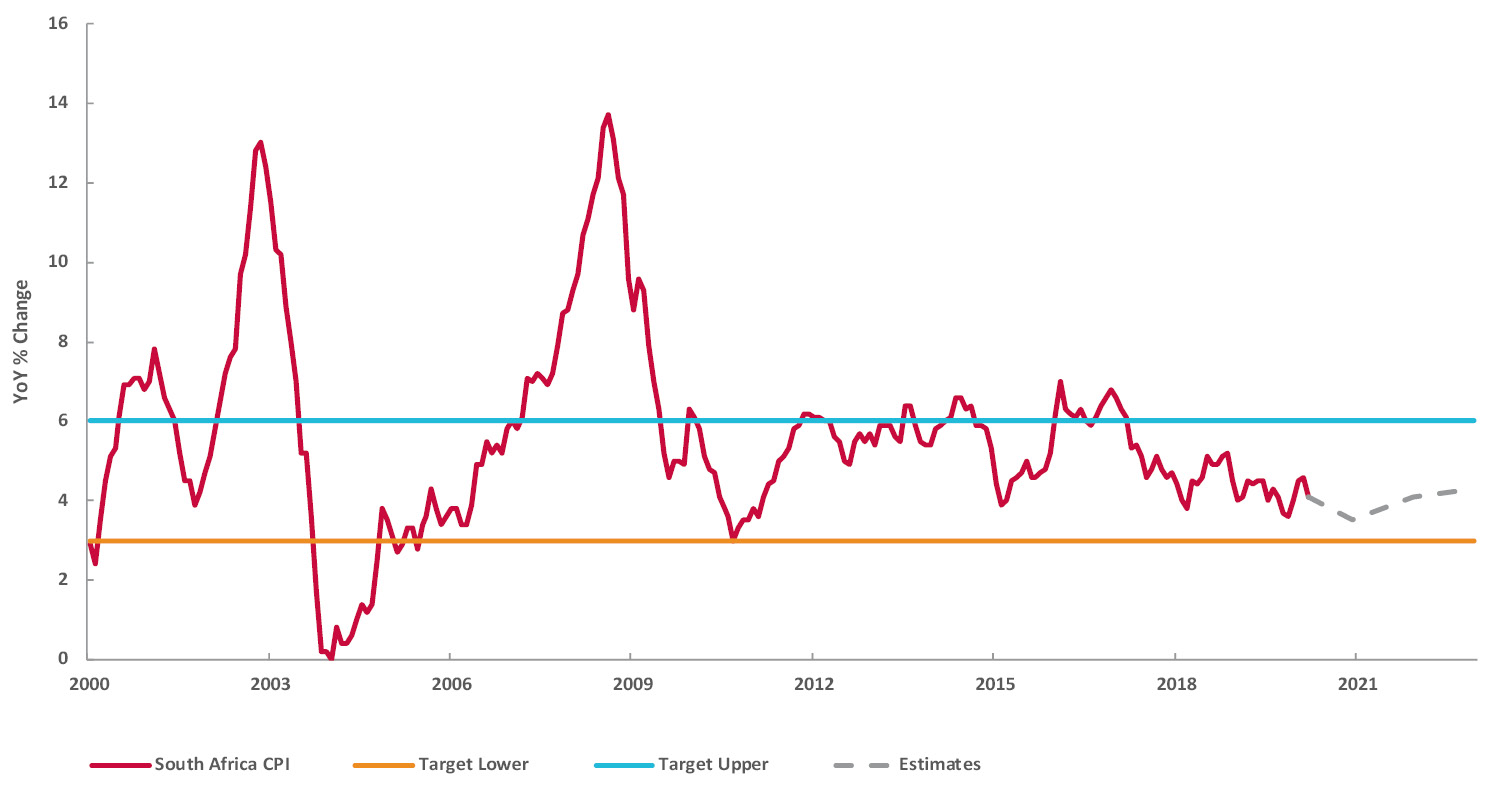 But South Africa fails in so many other critical areas.

Chart 5, which follows, depicts our real GDP growth since 1980, the characteristics being volatility, consistent underperformance against other emerging markets, a similarity to developed markets, current growth only barely above 0% and at times negative over the past few years. 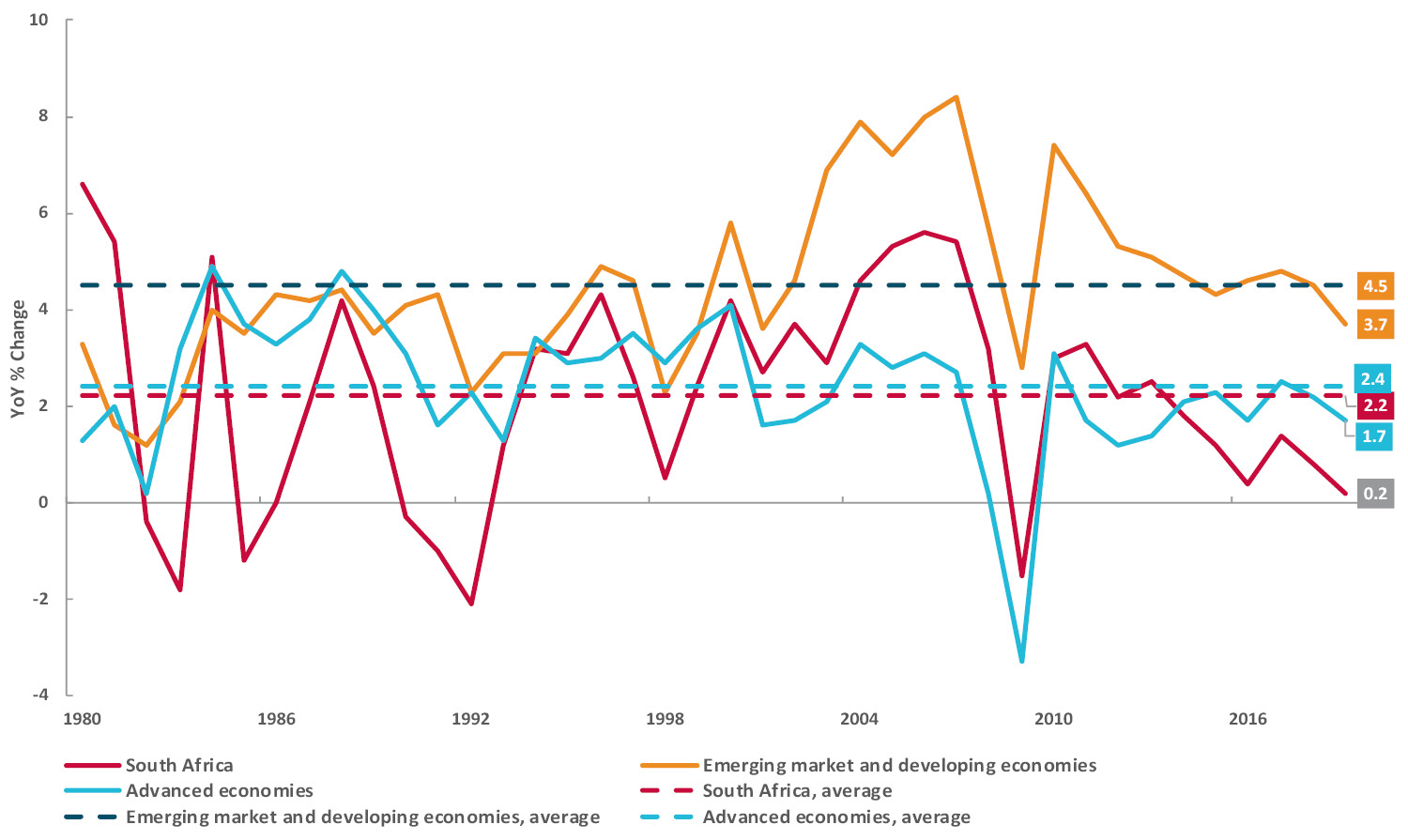 Chart 6 is a graph of SA national debt to GDP. The growth is not dissimilar to other countries, and has been increasing since the Global Financial Crisis (GFC) of 2008, as governments have paid for growth in the face of disinflation and a lack of natural economic momentum. The difference to other countries and concern is that SA Government expenditure has not been targeted at capital formation (building rail, roads and ports) etc. and instead remains heavily geared to welfare, public employment and debt repayments, none of which builds a capital base off which future returns can be generated for the economy. Imagine the economic benefits of proper railroads or ports in SA! Post COVID-19, net debt to GDP is estimated to be nearing 80%.

South Africa’s budget deficit (when a country’s expenses exceed its revenues) as a percentage of GDP is anticipated to reach 13% in 2020. In 2006 and 2007, we had a budget surplus in South Africa.

Chart 7 reveals what government macro-economic mismanagement and graft does to business confidence. 50 is a neutral reading, above that business is confident and below that negative. Evidently the business community has extreme mood swings. These are relatively repetitive with dips followed by on average 3-5 years of exuberance, a trend that has occurred since 1975. This changed in 2008 with few positive upswings and we all know what happened in 2008.

Markets are not immune

In the short-term, the market may disregard economics and find its own path. Given time however, companies need a macro-economic and sociopolitical environment that fosters and supports their profit growth. We have used Chart 8 previously to demonstrate how economic growth and company profits are intimately intertwined. It reveals how South Africa’s nominal GDP growth rate (in red) has been on the decline since 2006 and so too company profits.

Currently, by our own valuation estimates, many JSE listed companies, particularly those geared to the domestic economy are over-sold and offer sound risk-adjusted returns off depressed levels. However, based on the ebb and flow of stock prices where few of these company’s share prices reach new highs, investors are treating many JSE listed stocks as trading opportunities. They are buying at depressed levels and selling on any gains.

How to turn the tide positively for the JSE?

We conclude on an optimistic note, with research (Chart 9) undertaken by Elna Moolman (Head: SA macro-economic, fixed income and currency research Standard Bank South Africa), demonstrating that some easy wins across the economy will have a dramatic impact on our country’s potential GDP growth. We all need Government to do the right thing. 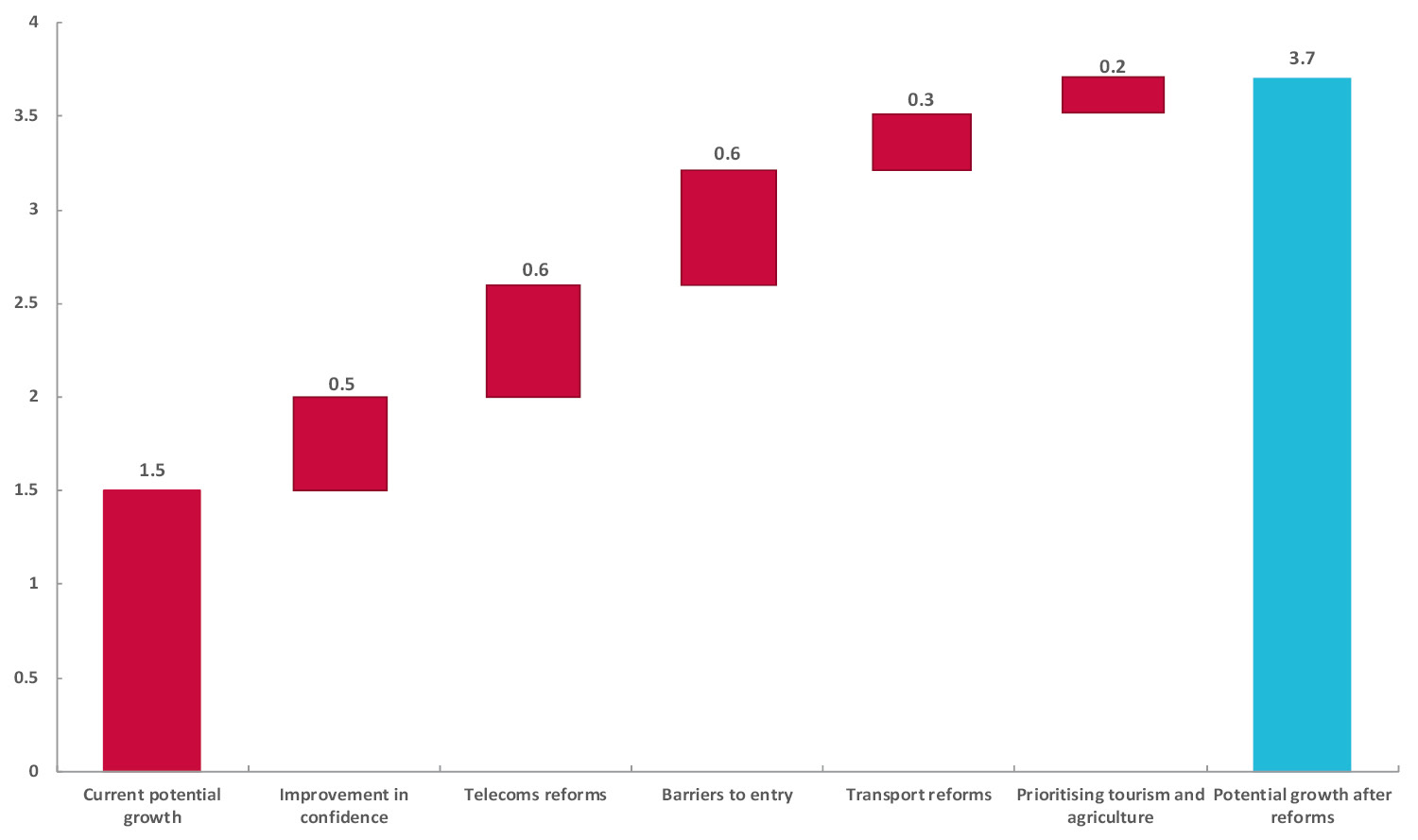