Moody’s has downgraded South Africa (SA) to Ba1 with a negative outlook (from Baa3). SA is now junk-rated by all major rating agencies. Losing our last investment-grade rating will mean being booted out of the World Government Bond Index (WGBI), with potentially R80bn to R120bn of bonds that are likely to be sold by foreigners. We expect that this will create further selling pressure on local bonds and the rand for a short period, while the oversupply of bonds is absorbed by other market participants.

The statement from Moody’s was direct and pinpointed its concerns. There were no surprises and we are all aware of the issues facing the country. Moody’s has four pillars to its rating process of sovereigns and Figure 1 below shows how each of these pillars are scored.

In this regard, we highlight that SA scores a weak investment grade on pretty much everything highlighted in Figure 1 and is pulled down by its fiscal strength. Indeed, SA’s fiscal strength is so poor that it drags everything else down to junk status. We can also see that SA is now rated Ba1, which is in the middle of the Moody’s rating band. Unless things get worse, we should stabilise at this rating, notwithstanding the negative outlook.

Junk status was all about our fiscal weakness. As per the Moody’s rating action “Debt-to-GDP increased by 10 percentage points (ppts) over 2014-18 and will rise by a further 22 ppts over 2019-23 under Moody’s baseline projections. Over that timeframe, Moody’s expects primary deficits to persist. The fiscal deficit will widen in fiscal 2020 to around 8.5% of GDP, as revenue declines this year, only narrowing very gradually thereafter. Fiscal strains from interest payments and support to state-owned enterprises (SOEs) will continue.”

We, along with several other market commentators, think that Moody’s is underestimating the impact COVID-19 will have on the SA economy. The lockdown and associated economic pain are more likely to see a deficit of about 10% in 2020. Moody’s acknowledges that its estimates might be conservative and, hence, have maintained a negative outlook on the rating.

In arriving at its numbers, Moody’s is looking at SA government debt and then adding to that the liabilities for guarantees that have been given for SOEs. Moody’s doesn’t believe that SAA or Eskom are viable going concerns and therefore adds their debt to that of the government. Such is the price of continuous bailouts. So, in part, Eskom has sunk us.

We maintain our view that the competing interests at Eskom are hampering a structural turnaround. Instead of absorbing the Eskom losses, the Public Investment Corporation (PIC) should rather be investing in a new electricity generation company and headhunting staff from Eskom to work for the new company. This has the benefit of increasing electricity supply and providing job security for some of the excess 16,000 employees at Eskom which government has acknowledged. At this stage, the rating agencies are already adding Eskom’s debt to that of the government, so government might as well take on the excess debt and be done with it. Instead, we are still waiting around for the company to be split into three parts while the country’s economy continues to suffer.

Per Moody’s, “Moreover, a strategy to stabilise electricity production has been slow to emerge and has yet to prove its effectiveness. Moody’s assumes that while power supply will become more reliable, the restoration of full capacity will take some years to complete.” Basically, Moody’s thinks that government is faffing about with minor issues and that as it stands, we are going to remain in the dark for a while. We note that in his State of the Nation Address, President Cyril Ramaphosa made bold announcements for the private production of electricity. However, while these changes would materially improve our economy, they are now being bogged down in bureaucracy and SA is losing jobs while all efforts are made to maintain the unsustainable and failing monopoly of Eskom. Competing interests are indeed hampering a structural change.

We see massive pressure for monetary stimulus in SA. There is pressure for interest rate cuts and some political parties are even calling for additional stimulus measures in the form of quantitative easing (QE). Yet Moody’s is honest and correct in its assessment that “The SARB may further cut interest rates this year, but monetary policy easing will not address structural economic issues and will at best prevent a deeper contraction.” Our problems are policy and structural and monetary policy cannot overcome these. There is also a point where further rate cuts will do more harm than good.

Instead, Moody’s says, “Structural issues such as labour market rigidities and uncertainty over property rights generated by the planned land reform remain unaddressed.” Basically, the playing field is tilted too far in favour of labour and this prevents businesses from creating employment. We need more flexibility in the labour markets.

Expanding on the Moody’s statement, we note that expropriation without compensation (EWC), which has been a rallying cry for socialist parties, is a problem. No one is investing for a long-term future in SA, while EWC and uncertainty over property rights hang over the country. Instead cash and jobs are leaving our shores. The plan is already impoverishing people and costing jobs. We need a social compact between government, business and civil society as a basis for long-term economic development and growth and it needs to address those concerns that Moody’s has identified. Currently these concerns are not being addressed.

Moody’s sees our consolidated debt levels growing to just over 90% of GDP by 2023. This is very stark for a country that had debt below 40% just more than a decade ago. We note that emerging countries generally run into trouble when their debt levels reach about 100% of GDP. That is the point where the decision between printing money (Zimbabwe style) or going to the IMF (Ghana style) needs to be made. The Moody’s report serves to highlight that the runway for current policies is getting shorter and that the time for difficult decisions has arrived.

The Moody’s rating action and associated releases have shone an uncomfortable spotlight on the structural challenges and policy issues that have led to the downgrade. They do, however, point out some of our positives as well. We have a strong and independent judiciary. Our banks and financial institutions are of high quality, while the SA Reserve Bank is also seen as a positive. We have a large and diversified economy which is positive, as is our society which is considered to be relatively open. We tend to look at the negatives and focus on those, however, considering the balanced view, we conclude that all is not lost and that a resilient society can overcome this. The risk of a government funding crisis is still considered low because we have a stable and dependable domestic market.

Through the COVID-19 crisis, we have seen politicians put aside their differences and working together to respond to a grave danger. The fiscal cliff that is approaching is far more dangerous and risks more people dying than COVID-19. Our hope is that we can work together to recover from the economic tragedy that has befallen us. However, for as long as government policies are spawned from their distrust of the private sector and an attempt to control it, we will see job losses and increasing poverty. Without a relationship of trust between government, labour and business there is no future.

Our role is to assess all of this and what it means for investment. We are at a difficult point in time, trying to assess the risk premiums that have been priced in from the COVID-19 crisis and then to establish how that changes with the Moody’s downgrade.

As countries slide down the slope towards a weaker credit quality, their domestic bond yields also increase. The absolute rate on SA long-term bonds is about 13% as a result of the COVID-19 crisis. This is in-line with the historic yields on Nigerian and Kenyan domestic debt. We believe that SA bonds remain a better-quality credit and we therefore see some scope for our bonds to recover over time. Obviously, a steeper yield curve is warranted as future risks are greater.

We also know that as the country’s fiscal situation deteriorates, the real yield tends to increase to levels that are above those suggested by fundamental models. SA’s long-term inflation target is 4.5%, while fundamental models suggest that the SA 10-year bond should yield about 8%. This is a real yield of c. 3.5%. In our view, the deterioration in SA probably aligns with real yields of about 5% to 7%. That would imply that a bond yield of around 9.5% to 11.5% is reasonable. This, in turn, aligns nicely with being just a little stronger than Nigerian and Kenyan debt.

The likely excess foreign selling of local bonds will push yields slightly higher in the short term, with a recovery in the next six- to nine- months as the overhang of supply is cleared. We also think that the risk-on environment after COVID-19 will push yields to the bottom-end of our range. There is probably about a 13% upside to bonds from the closing prices on Friday (27 March). While investors wait for that to play out, they are earning attractive interest income of CPI + 7%.

We subscribe to the purchasing power parity (PPP) model for the rand. The Rand closed at R17.63/$1 on Friday and we believe that the knee-jerk reaction and foreign selling of bonds might push this a little weaker in the near term. Over time, however, we expect this to recover towards its PPP level. Current SA government policies are not likely to materially increase inflation and therefore, we have confidence that the rand should recover once the COVID-19 crisis passes. We think that the recovery will be driven by short-term carry trades, which can result in the snap back being quite fast when it does arrive. 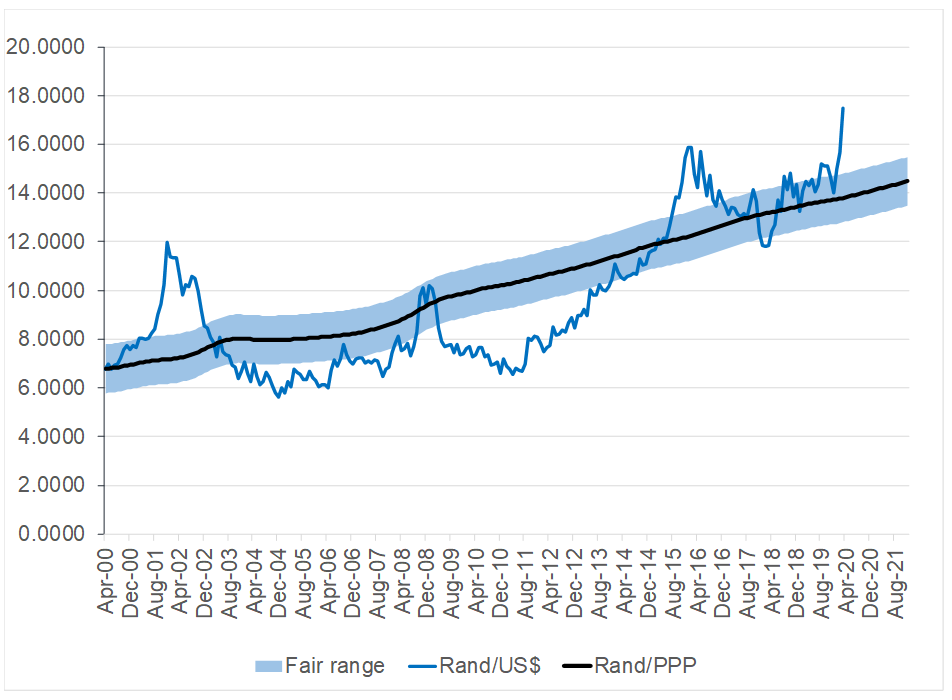 The Moody’s report is more problematic for equities. It highlights the difficulties of the domestic operating environment. While we hope that policymakers take note of this, we do not expect the situation to change in the near term. The most likely scenario is a continuation of job losses and current difficult operating conditions. The higher real yield demanded by bondholders will make the cost of capital higher, while the size of government will continue to crowd out the private sector. The saving grace for domestic equities is that COVID-19 has made them very cheap and we therefore think that there will be good opportunities for a bounce in equities. Some quality companies will continue to grow in this difficult operating environment but, structurally, domestically focused equities will have a tougher uphill battle on their hands. Our approach is to avoid those companies that will face long-term structural damage from current events and to rather focus on companies that should emerge in reasonable shape after the current crisis subsides – some of these are trading at valuations seen only once in a decade. Companies that generate offshore revenue are an easier call. But we are approaching the scenario with caution and the facts are changing continually. It can take some time for the market to stabilise and investors who deploy new capital into equities must be able to stomach further potential downside